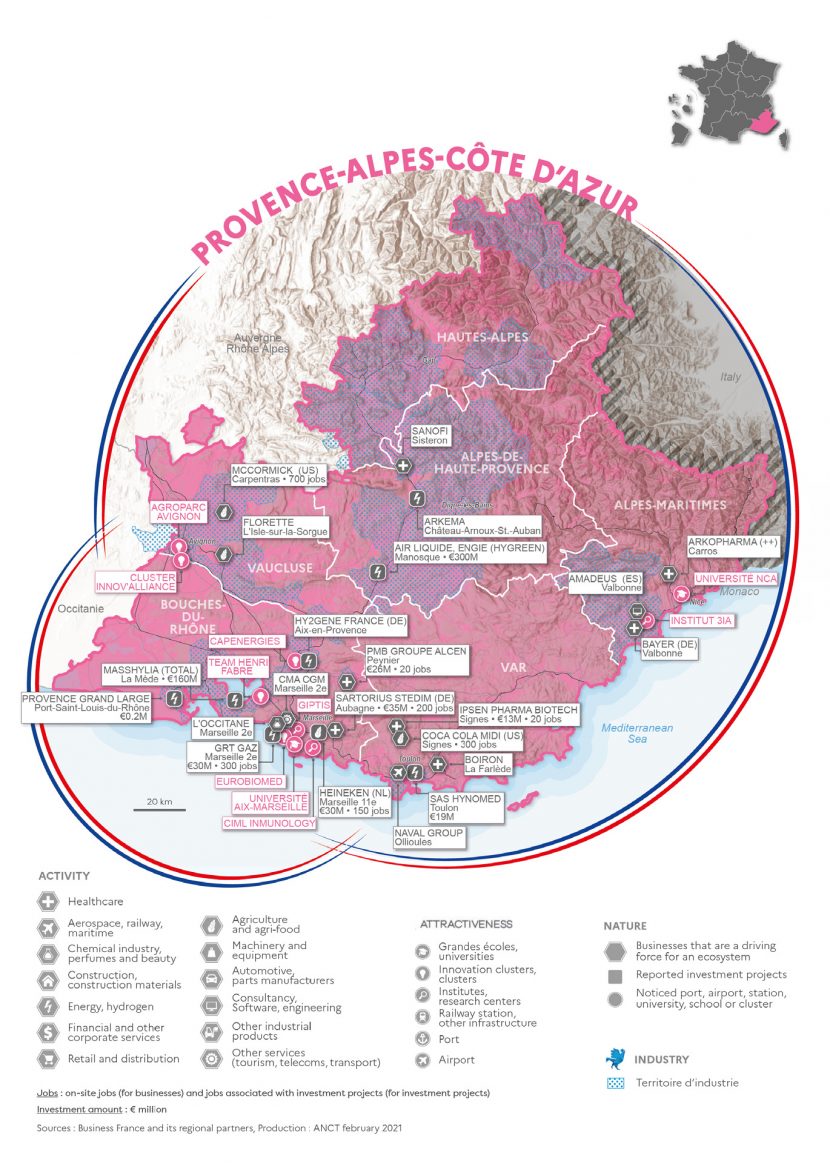 At the forefront of innovation

The Sud region employs 29,000 people in R&D and is home to Sophia-Antipolis, Europe’s largest technology park. It has 300 public research laboratories, four leading universities, four French Tech ecosystems and a number of clusters.

Industries of the Future: over 23,000 industrial firms, including Airbus Helicopters, Thales, Naval Group, CMA CGM, the CNIM group and L’Occitane

The natural world: cosmetics, agri-food, plant extracts, and home to 50% of France’s production of scents

The french way of life

The Sud region attracts more than 34 million tourists annually. Set between sea and mountains, the region is
well-known for the beauty of its natural landscapes. Its cultural heritage is no less remarkable, with more than
2,200 listed historical monuments and five sites on the UNESCO World Heritage list. The region hosts 220 festivals
each year, including several of international scope – the Cannes film festival, the Festival International d’Art Lyrique
in Aix and the Festival d’Avignon, among others – as well as major sporting events such as the French Grand Prix
at Le Castellet and the 2024 Summer Olympics, for which some events will be held in Marseille.

The Sud region is home to 100,000 foreign residents of 160 different nationalities, as well as more than 2,200
foreign companies. Over the past decade, it has been the focus of 674 foreign investment projects, which have created or saved nearly
20,000 jobs – an average of one project per week. The Sud region is also home to ITER, the world’s largest fusion experiment, representing more than €18bn in investments.

In connection with the support for a foreign investment project currently being implemented in the Bouches-du-Rhônes region by Provence Promotion: Provence Promotion has created a bilingual French/English website living-working-provence.com/fr/#pll_switcher.

It is intended to be a tool to help people make decisions (transferred employees, people with a business creation project) who wish to set themselves up in the region. Using an interactive map, you can check out the neighbourhoods, towns or villages in which you might decide to live and work. The site also highlights videos of testimonials from people who have made the leap and come to settle in our region.

In connection with the support for a foreign investment project underway in the territory, by risingSUD or one of the partner infra-territorial agencies:

New compared to what has already been completed in the first version of WelcomeToFrance => In high schools with international sections: Albert 1st High School in Monaco (no international section but 6 foreign languages are taught: German, English, Chinese, Spanish, Italian, Russian.)

Fénéleon Institute in Grasse. English section of the College and High School.

Provence-Alpes-Côte d’Azur International School: School with a unique arrangement for co-operation with the ITER project to welcome, in particular, the children of employees and collaborators. Located in Manosque, 20 minutes from the ITER site; School curriculum adapted to the diversity of student profiles, from primary school to secondary school; 26 nationalities represented; 6 language sections; 50% teaching in French and 50% in another chosen language (up to 80% in English for English speakers)

French Tech broadly represents the network of players in the French ecosystem of start-ups.

Each member has several areas of expertise. There are 2 French Tech capitals (Aix-Marseille and Côte d’Azur) and 2 French Tech hubs (Grande Provence and Toulon) in the Provence-Alpes-Côte d’Aur region. This network represents more than 180 Tech champions generating an annual turnover of 5 million euros and employing 70,000 people. One thing to know is that the French Tech Grande Provence is the only one to be labeled “Culture” in France.

The attractiveness of the Provence Alpes Côte d’Azur region makes it one of the world’s leading tourist destinations (more than 34 million visitors) but also the 2nd largest European region for tourism capacity.

Located at the crossroads of the North-South and East-West axes, it enjoys a strategic position on the Mediterranean arc. Bordered by both the Mediterranean Sea, Italy and the Rhône-Alpes region, it is open to a real economic, geographical, human and cultural melting pot.

Natural sites out of the ordinary

exceptional land where sea and mountain compete of beauty, the region offers an infinite range of landscapes.

Sun and sweetness of life

The climate and the south feel are no longer to boast. They make the Provence Alpes Côte d’Azur a colorful territory where the art of living has become legendary.

An important ancient and religious heritage with no less than 753 monuments classified as historical monuments.

Bouillabaisse, Pan Bagnat, Anchoiade and Provencal Stew are classics of the genre. A fresh and inventive Mediterranean cuisine made of sunny local products and bursting with flavors and scents.

A scuba diving in the Mediterranean in the morning, a ski descent in the afternoon. You dreamed of it? The Provence Alpes Côte d’Azur region did it! The contrast of its reliefs allows all kinds of sports activities but not only …