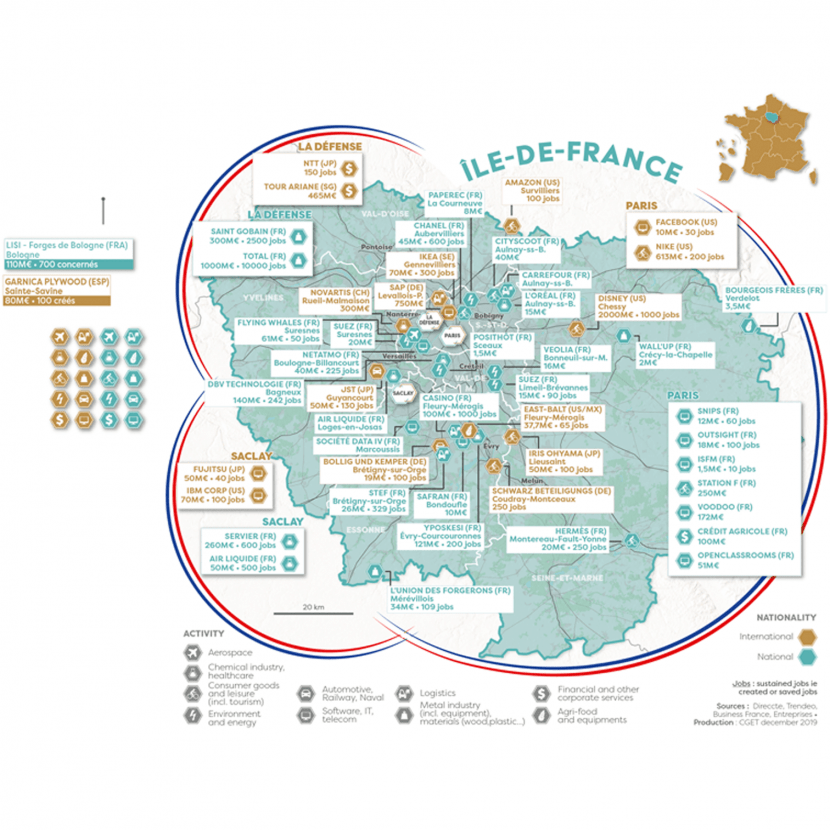 Ile-de-France is the prime business region in Europe and one of the most important in the world. By itself it accounts for 4.5% of European GDP. It is distinguished by a highly concentrated productive system, with
1,055,000 businesses, and is home to almost two thirds of headquarters of French businesses employing over 2,000 people. It has the greatest amount of corporate real estate in Europe.

It is the largest employment area in Europe, with six million jobs and a highly skilled labour force (35% of French executives).

Paris is the largest EU stock market in terms of capitalisation, trading and number of listings and Europe’s leading bond market. France leads the asset management industry in continental Europe (ranking second in Europe as a whole), and on this market Paris has an asset management ecosystem unrivalled in Europe. Over 600 specialist companies are established there, and four French firms number among the world’s twenty leading asset managers. Paris has the largest concentration of foreign banks and financial institutions in Europe.

A key region for research and innovation

Ile-de-France is Europe’s leading R&D region with overall R&D spending equivalent to that of Silicon Valley. Research and development provides employment for 162,000 people in global R&D centres and in the many businesses at the forefront of global innovation. This global appeal is underpinned by internationally recognised hubs such as Grand Roissy, La Défense and Paris-Saclay. Ile-de-France currently has a number of competitiveness clusters operating in its area, covering over 4,300 members, including more than 3,600 businesses. The region also has an extremely dense innovation ecosystem, with over a hundred incubators and accelerators to support the growth of entrepreneurial projects. The opening of Station F, the world’s largest incubator, in 2017 is part of this process, bringing together thousands of creators, partners, investors and talents in one spot.

As the world’s leading tourist destination, Ile-de-France receives 49 million tourists a year. The region contains the French capital and is supported by business tourism (Nine million visitors to the region’s 440 trade fairs and 1,110 congresses), its abundance of remarkable heritage and its outstanding cultural offering: 4,000 historical monuments, 140 museums, 700 theatres and cinemas and five opera houses. Its cultural and tourist sites are known throughout the world: Disneyland® Paris, Notre Dame, the Sacré Coeur, the Louvre Museum, the Eiffel Tower and the Palace of Versailles.

Ile-de-France has the global ambition of becoming a megalopolis driving future innovation and promoting major international events. By doubling the size of the Paris metro system, the Grand Paris Express – the largest infrastructure project in Europe – will take the region into this new dimension. Paris will also be hosting the 2024 Olympic Games, which will generate major infrastructure and construction projects.

Choose Paris Region provides free, confidential and customized support to international companies throughout the entire process, from decision-making to implementation and even re-invest. Among its services, the Global Mobility team can help your foreign employees and families relocate to Paris Region: immigration procedures, housing research, bank accounts, schooling, healthcare, spouse integration and employment…

Paris Region has an extensive selection of bilingual programs and international schools open to foreign and French pupils from kindergarden to high school:

Do you want to gain insight on French education, particularly regarding languages? Do not hesitate to contact us: ce.contactinternational@ac-versailles.fr

The startup ecosystem in the Paris Region is today one of the most active in the world:

Cinephiles and athletes, foodies and nature-lovers, art buffs and world travelers…Life in the Paris Region offers something for everyone.

Enjoy an unforgettable life experience in Paris Region with: