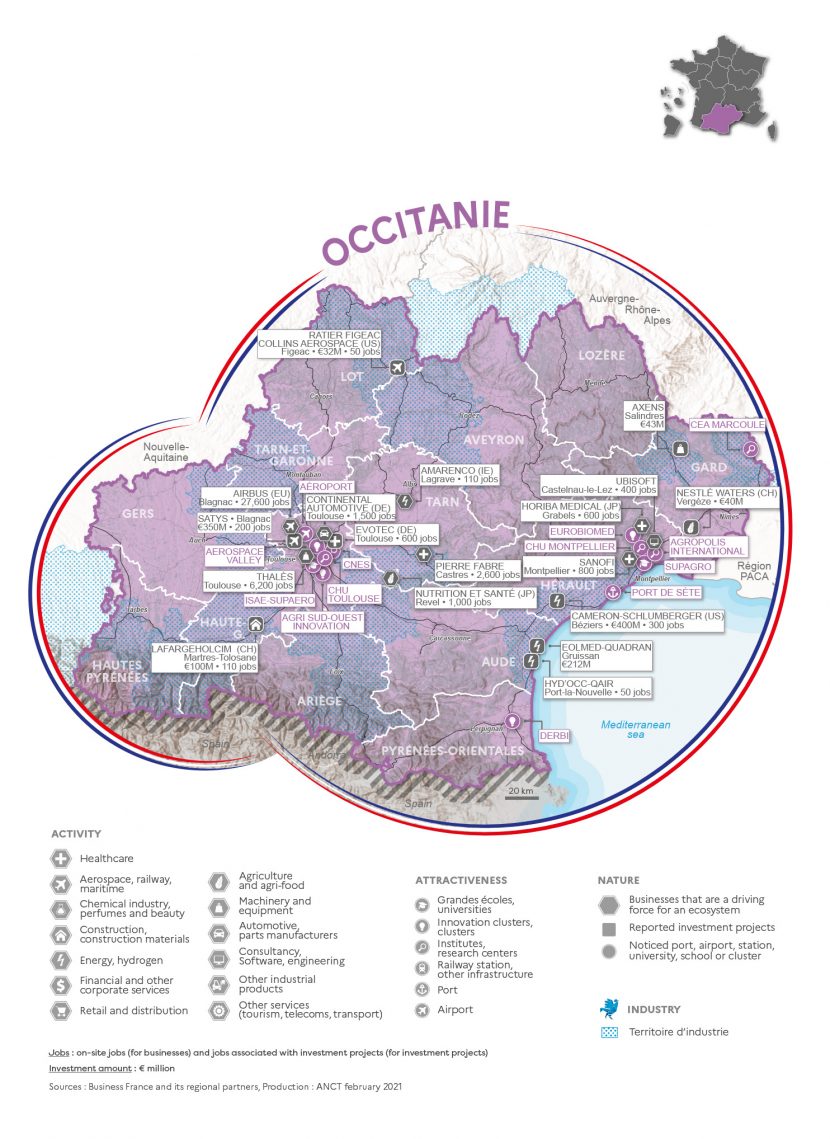 Strategic location in the heart of southern Europe

Occitanie is France’s second-largest region in surface area, with two European-sized cities, Toulouse and Montpellier. It is strategically located in the heart of southern Europe. A sea-facing region, Occitanie is home to France’s largest network of regional ports providing value in terms of shipping and logistics thanks to its three commercial ports.

A booming national and european-level economy

Demographically, Occitanie is growing by leaps and bounds – its population increases each year by 50,000 inhabitants – and the region’s economic appeal is noteworthy. Its per-capita wealth puts in in line with Catalonia. It is the leading region in France in terms of rates of business creation.

Agriculture, which takes up half of the region’s land mass, drives a powerful agri-food sector whose key features are quality, organic farming (it is the country’s top organic region, with more than 7,000 organic producers, accounting for 20% of the total), regional specialties and a strong Mediterranean emphasis. It is also the world’s largest “appellation” wine region.

Its expertise in aerospace and embedded systems are known the world over. With more than 800 companies, 86,000 jobs – one-quarter of the European space workforce – Occitanie is the leading European region in these sectors, notably due to the presence of Airbus, Thales Alenia Space, and the National Center for Space Studies (CNES).

Renewable energies are one of Occitanie’s strong points: the region has immense green energy potential and is poised to become Europe’s first Positive Energy Region by 2050. Within France, it is ranked second for renewable energy, photovoltaic and hydroelectric production, third in terms of wind power and fifth when it comes to biomass.

With 35 Grandes Écoles and two universities, Occitanie has the third-largest student population in France (nearly 230,000), together with 29,400 researchers, ten institutions dedicated to technology transfer (including the IRT Saint Exupéry Technology Research Institute, Toulouse Tech Transfer, AxLR), and several dozen clusters and business networks (including one global cluster and two with a global focus).

In 2018, the city of Toulouse hosted the 8th edition of the Euro Science Open Forum, Europe’s largest interdisciplinary professional gathering devoted to science and innovation. This was a first for France.

Montpellier has become a leader in France in the field of video games. Ubisoft has set up shop here in the 1990s, and a number of independent studios open their doors each year, creating an ecosystem that is propitious for startups. By way of example, in 2018, Ubi Global ranked the Business & Innovation Centre (BIC) in Montpellier the second-best incubator in the world.

A thriving tourist scene driving by water sports and hydrotherapy

Occitanie’s Mediterranean shoreline, two mountain ranges and robust historical and cultural identity make it the fourth most popular tourist destination in France. It is also the country’s number one spa region, welcoming 166,000 visitors each year.

Relocation Partners / Mobility Assistance in Montpellier: RWS, Privilege Sud, Ma Nouvelle Ville. Information and support by Ad’Occ if needed concerning the Talent Passport, Investing and exercising a commercial or industrial activity in France, How to apply for a residence permit, etc.