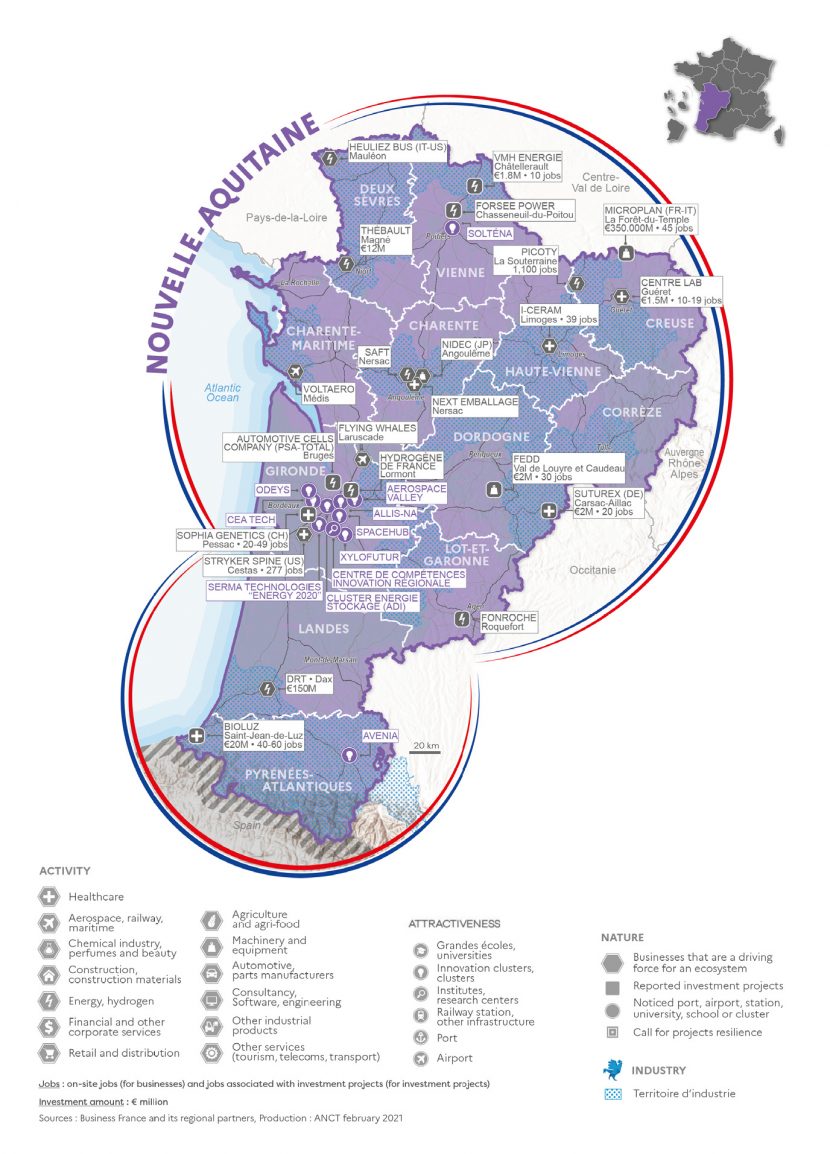 Nouvelle-Aquitaine is France’s largest region by surface area, and the third largest economic region by GDP. It is home to four major industrial sectors.

As Europe’s leading agricultural region – the secondlargest in terms of the number of organic farms – Nouvelle-Aquitaine boasts a large and diverse agri-food industry : arable crops in Aquitaine and Poitou-Charentes, wine-growing with the vineyards in Bordeaux and Cognac, livestock (meat and dairy) in Limousin and Pyrénées-Atlantiques.

As mainland France’s leading region in terms of woodedareas (2.8 million hectares), Nouvelle-Aquitaine is home to timber harvesting, sawmilling and furniture-making activities, as well as the paper industry.

Thanks to the Energies Stockage cluster, the region is also well-positioned in terms of renewable energies (especially wind, geothermal, marine and solar energy). The cluster brings together stakeholders to address shared challenges, including management of intermittent renewable energies, energy storage including new forms of batteries, solar energy, hydrogen and cooperation with other materials sectors, and digital technology.

A solid ecosystem to support technology transfer and innovation

As France’s leading region in terms of support for R&D, the Nouvelle-Aquitaine ecosystem is home to a large number of clusters, “third places” (fab labs, coworking spaces) and competitiveness hubs that drive innovation in the region’s strategic sectors.

Bordeaux, which has been named a “French Tech city”, promotes ecosystems that are conducive to the creation and growth of start-ups. The Digital Aquitaine cluster provides support and impetus for joint efforts between regional companies and the digital sector. Areas such as virtual and augmented reality, video games, IT services and e-healthcare are expanding and welcoming an increasing number of investors.

27 million tourists per year – One of France most-visited regions

With its 720 km of shoreline, Nouvelle-Aquitaine is the second most-visited region in France. Visitors have a vast number of tourist destinations to choose from, set in a variety of landscapes (Bordeaux, the Dune of Pilat, Biarritz, the Arcachon basin, and more).

Welcome to the Nouvelle Aquitaine

One-stop shop in the region

Live from the region Nouvelle Aquitaine