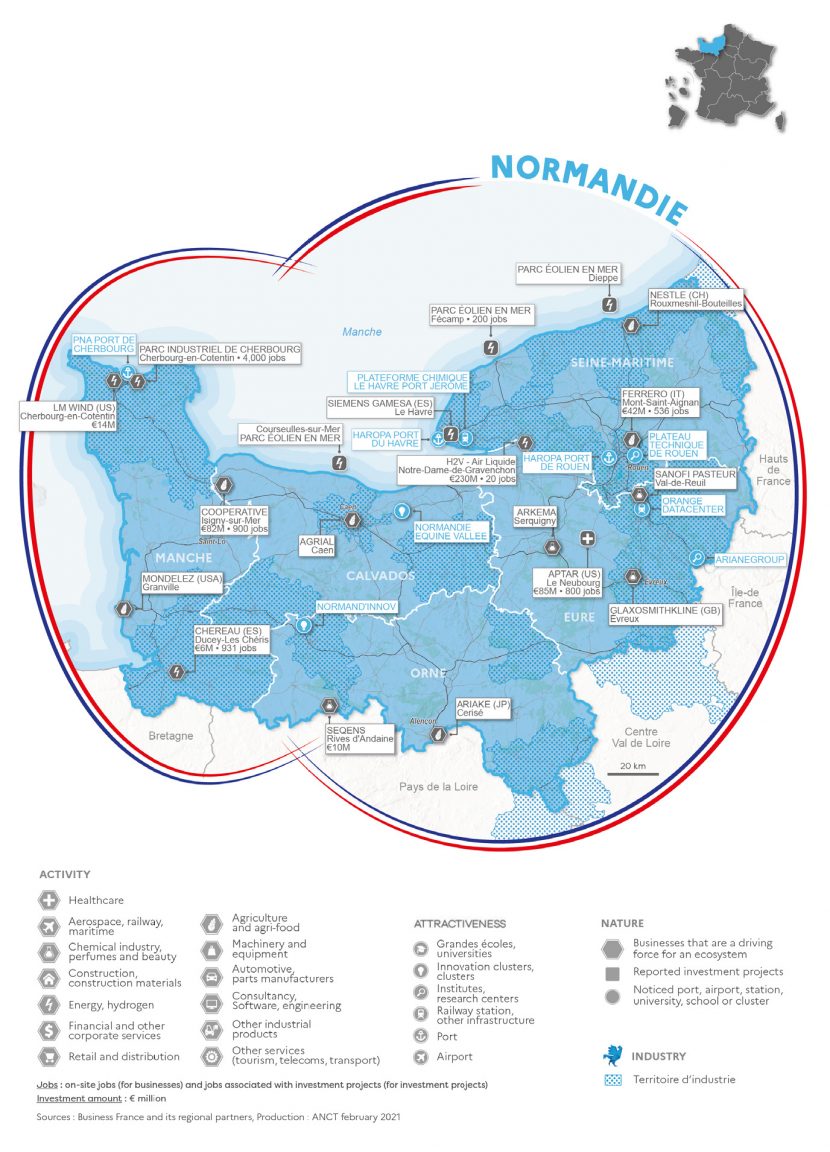 Industry accounts for 20.3% of the region’s value added and 23% of jobs, making Normandie a significant industrial region. It is the location of many large companies, including the two largest French refineries (Total and Exxon Mobil), three nuclear power plants (Paluel, Penly and Flamanville), as well as the La Hague nuclear fuel reprocessing site and major plants for the automotive (Renault) and aerospace (Snecma, Thales Aerospace) sectors.

Varied and abundant agriculture and fishing

Normandie is a bountiful agricultural region where livestock and farming zones co-exist. With 600 km (370 miles) of coastline, the region has extensive fishing grounds. It is also home to one of the largest oyster- and mussel-farming catchment areas. As France’s top cheese-producing region, Normandie is well-known for its many Protected Designations of Origin (PDOs).

Normandie is a favorite destination for green tourism, thanks to the quality of its natural spaces. Tourists can enjoy unspoiled seaside getaways in a variety of forms. The region boasts several sites on UNESCO’s World Heritage List. With 2.5 million visitors annually, Mont-Saint-Michel and its bay are among the most-visited tourist sites in France.

There is also the Le Havre city center, which was rebuilt by Auguste Perret, the Vauban observatory towers in Tahihou and La Hougue, and the Bayeux Tapestry, which has been included in UNESCO’s Memory of the World Register. Remembrance tourism enjoys a special status in Normandie, with the D-Day landing beaches and many locations focusing on the Second World War (the Caen Memorial Museum in particular).

The AD NORMANDIE, a one-stop shop for businesses, offers a “Welcome Package” which includes specific support. In conjunction with all local partners, the agency facilitates the integration of the entrepreneur, their family and employees into local life.

Normandie welcomes startup projects and offers them accommodation, tailor-made workshops, personalized support and access to the pool of Normandie entrepreneurs and experts through our incubators for creation and our accelerators for development.

Explore fabulous places such as Mont-Saint-Michel, Etretat, Giverny or Rouen. Or explore the region from another angle, through activities and themes such as cycling, horse-riding, gastronomy, the Middle Ages or the D-Day Beaches.

The Normans whisper their secret plans to you: https://www.secrets-normands.com/