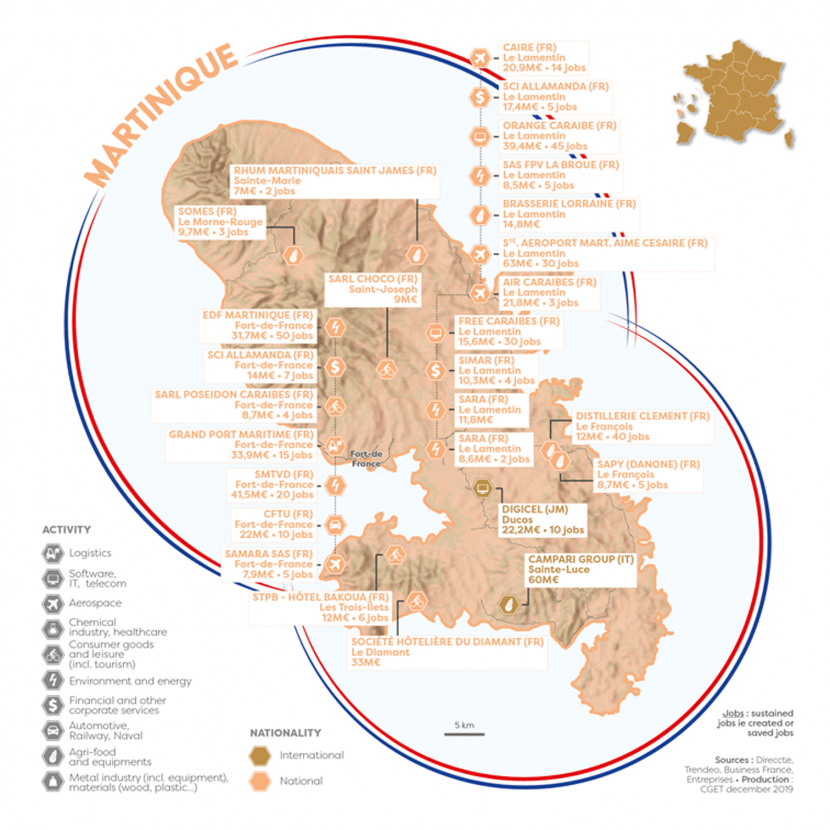 La Martinique: a French and European region in the heart of the Americas

Roughly halfway between Brazil and the United States of America, Martinique belongs to “Caribbean” area that includes a large number of island territories, as
well as continental territories across the coast from Venezuela to Mexico. Martinique is an associate member of the Association of Caribbean States (ACS) and the Organisation of Eastern Caribbean States (OECS).

Its membership of French national territory and its quality as an outermost region of the European Union enable it to live up to French standards of business – including infrastructures – while also being able to act as a voice of Europe in a dynamic region, admittedly under North American influence, but keen to diversify its partnerships.

Martinique’s port infrastructure is ranked seventh in France for traffic and leading airport infrastructure. It’s a rapidly expanding market, representing a real opportunity for national and international investors who are thinking of setting up business in Martinique in priority development sectors.

Boasting a strong production of bananas and sugar cane, the primary sector accounts for 4% of GDP (fishing included).

The secondary sector – which has diversified from its origins in import-substitution – is today dominated by the energy, agri-food and construction sectors (14% of GDP). The tertiary sector (82% of GDP) has growing sectors, such as automotive transport and tourism.

In 2019, two regions of Martinique received the “Territoires d’industrie” accreditation.

In 2020, Martinique’s local authorities will launch a call for Industry 4.0 projects.

Tourism due to grow strongly

The increase in the tourism business led to an 18.5% rise in visitor numbers in 2017 (a little over one million visitors), which was the best performance since 1998, with an increase of 40% in the number of cruise passengers (453,364 people).

For Martinique-based businesses, tourism is to be the source of job growth, and work is underway to increase its contribution to GDP to a similar level to that of
the sovereign islands of the Lesser Antilles, where it brings in between 20% and 50% of GDP.

The new consensus on tourism aims to put forward the rich, singular cultural and culinary historical legacy of Martinique, through heightened differentiation and a move upmarket of the destination.

Efforts of all the local authorities are being combined to support the attractiveness of Martinique for investment.

Besides access to all state aid for businesses in operation in France, the state offers Martinique special provisions as an overseas territory to make investments tax-exempt, an innovation tax credit and a research tax credit with higher rates than in France, and specific measures to waive social security contributions.

The European Union operational programs are at the height of their convergence objective, with the averagelevel of development of other European territories. Local authorities have appropriated their expertise on economic development and have clarified their objectives and support schemes.