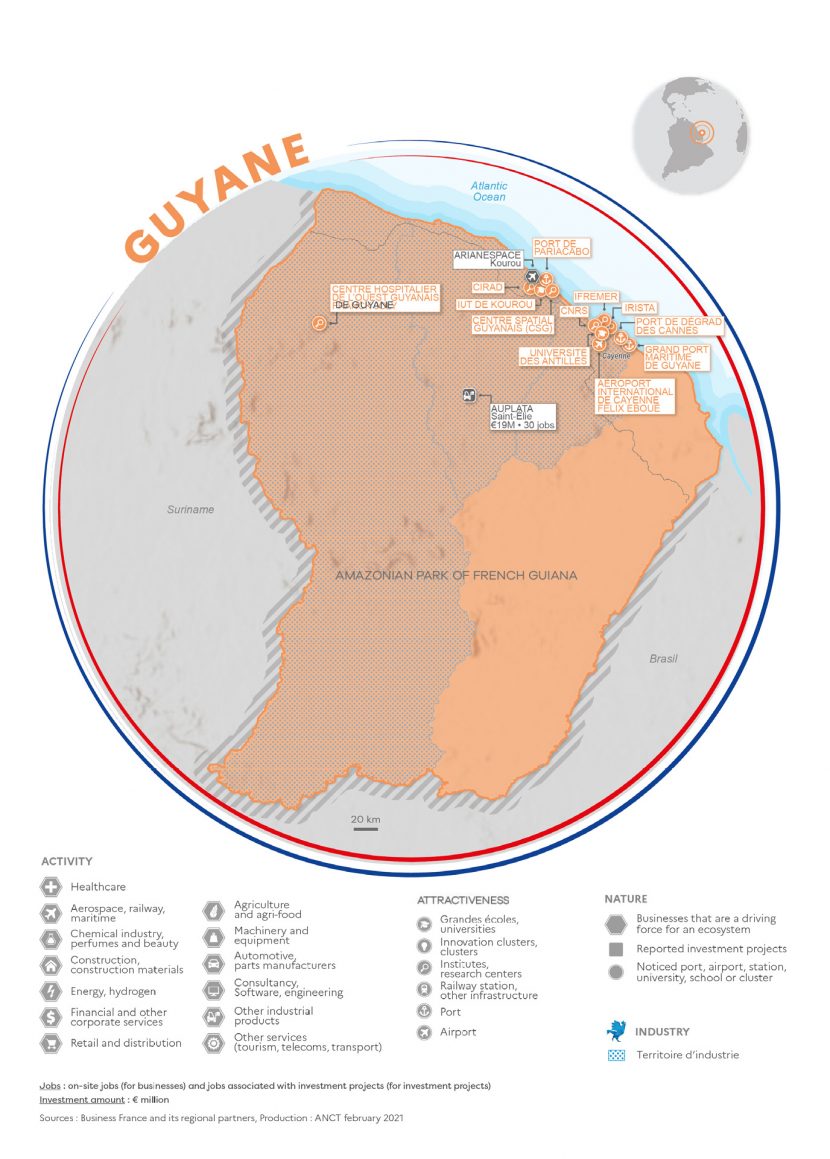 French Guiana is located on the north Atlantic coast of South America. Its growth is based on its exceptional geostrategic location, a qualified and competitive workforce, and an abundance of natural resources. Aerospace-related activity, which is centered on the Guiana Space Centre and a number of research centers, mean that French Guiana has the second-highest proportion of research jobs in all of France’s regions, just behind the Greater Paris region.

Located on the north tip of South America, French Guiana is the only region on the continent that belongs to seven European outermost regions. It bases its growth on its unique geostrategic position, offering investors a multimodal hub looking towards the American continent as well as Europe (international airport, maritime ports, water links and roads), its very high demographic growth (with a population due to double in size by 2040 to reach half a million inhabitants), a qualified and competitive workforce, and the richness of its natural resources.

French Guiana is growing exceptionally quickly: in 2017, it came third in South America in terms of GDP per inhabitant.

A productive base borne by the vibrancy of space activity, offering opportunities in several sectors

The Guiana Space Center in Kourou serves as an operational base for the Soyuz and Vega rocket launchers. It is set on nearly 700 sq. km. (270 sq. miles) of land and contains all the launching infrastructure used by Arianespace and its partners (production installations, preparation, assembly, etc.). Space activity (16% of GDP) and the presence of several research centers gives French Guiana the second highest share of jobs in research of French regions, just behind Ile de France Paris region). With 11% of employees, there are also a lot of business services set up here.

The agri-food, cosmetics, renewable energy, tourism, audiovisual production, healthcare and industry in a general manner… All of these sectors offer important opportunities to investors.

The development of French Guiana is linked with the rising arrival of a graduated youth on the employment market. The number of students at the University of French Guiana almost doubled in less than 5 years, to reach 4 100 in 2020. The university counts 31 studying programs including master’s degree specialisations.

The Amazon rainforest covers 95% of French Guiana’s territory, amounting to more than eight million hectares. It comprises more than 1,200 species of trees, including numerous precious woods. The wood sector is one of the major economic activities.

The region hopes to lead a development strategy that will see it triple the volume of wood it uses in 10 years.

This exceptional wealth of biodiversity means that French Guiana is an ideal location for the development of biotechs, cosmetics and pharmaceuticals.

French Guiana has exceptional marine biodiversity, with around forty species of fish being sold.

Fishing developed with the industrial exploitation of two resources: snappers and shrimps. Fishing is the third largest sector by value of exports. Each year, around 5,000 tonnes of fish products are unloaded at different ports around the coastline, making Cayenne the fourth most important French fishing port.

Guyane Développement Innovation is the Business France Invest representative that assists international companies wishing to establish themselves in French Guiana by:

Startups are welcomed in incubators to develop their concept and find finance. French Guiana has a welcoming tech environment for entrepreneurs. Since 2020, Guyane Tech is part of the French Tech Community.